A pysanka is a bird-egg painted with a miniature ornamental pattern. It is one of the most ancient forms of Ukrainian folk painting associated with the age-old folk rituals of meeting spring and awakening of nature.

Pysanka eggs are characteristic of the majority European nations as well as innate for many peoples of Asia and Africa. The oldest of them date back as early as 3,000 years BC.

The roots of Ukrainian pysankas could be traced back to the ancient Trypillya Culture. The pysanka-painting art reached its golden age with the spread of Christianity in Kyivan Rus in the 10-13th centuries AD. At that the Ancient Rus masters manufactured a lot of ceramic painted eggs due to which these artefacts managed to preserve till present days. The oldest preserved Ukrainian pysanka eggs made of chicken eggs date back to 19th – early 20th century.

Our ancestors believed that pysanka eggs possessed a magic power, brought good fortune, happiness and protected people from everything evil. In pre-Christian times pysankas used to serve families as charms whereas the pagan symbols on them were reinterpreted by Christians and adapted according to their vision. Consequently, the dots symbolizing stars signified the tears of Mother of God, the fish that was a symbol of health turned into the sign of Jesus, the pictogram that used to symbolize four corners of the world became a Cross, while the triangle with which our ancestors depicted the triforce of earth, sky and elements was reinterpreted as a symbol of Trinity.

By and large the pysanka ornaments can be divided into the geometric and the image-bearing signs. One of the most wide-spread symbols is the sun depicted as a circle, a spiral or a rose. The figure of endlessness expressed by a wave or meander would protect from troubles. A staircase was a symbol of searching for a better life. A symbol of sieve would help separating the good from the evil. A path was a symbol of eternity. Widespread pictorial elements were ‘the tree of life’ and ‘a pine twig’ also called ‘sosonka’ interpreted as the symbols of revival. A horse stood for power and stamina, a deer would mean a long life and wealth, a swallow was a symbol of happiness, good harvest and spring, a bee would infer industriousness and purity of soul, a spider signified persistence and patience.

In olden days pysanka eggs were coloured with herbal paints (based on onion skins, leaves, roots and tree bark) but since early 20th century people have started using aniline dyes as well.

Various regions of Ukraine have their own special features in decorating Easter eggs:

Each Easter egg is special and unique. So we invite you to our Lihtaryk Art Studio for a master-class in pysanka painting where you will be able to get involved into the age-old art and create your own talisman pysanka having given it a special meaning. 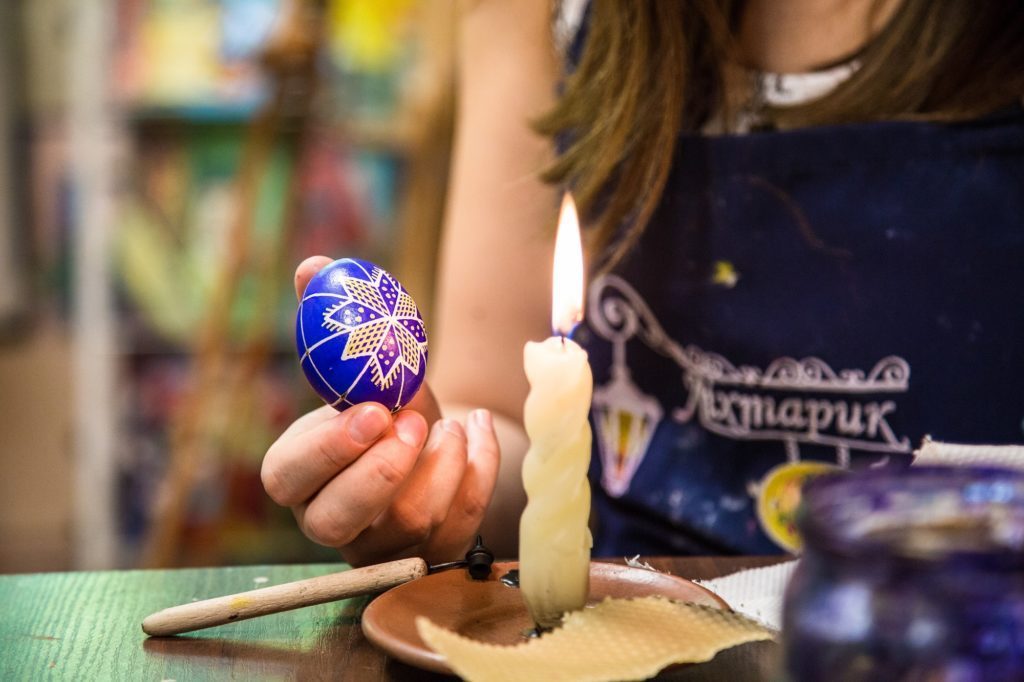 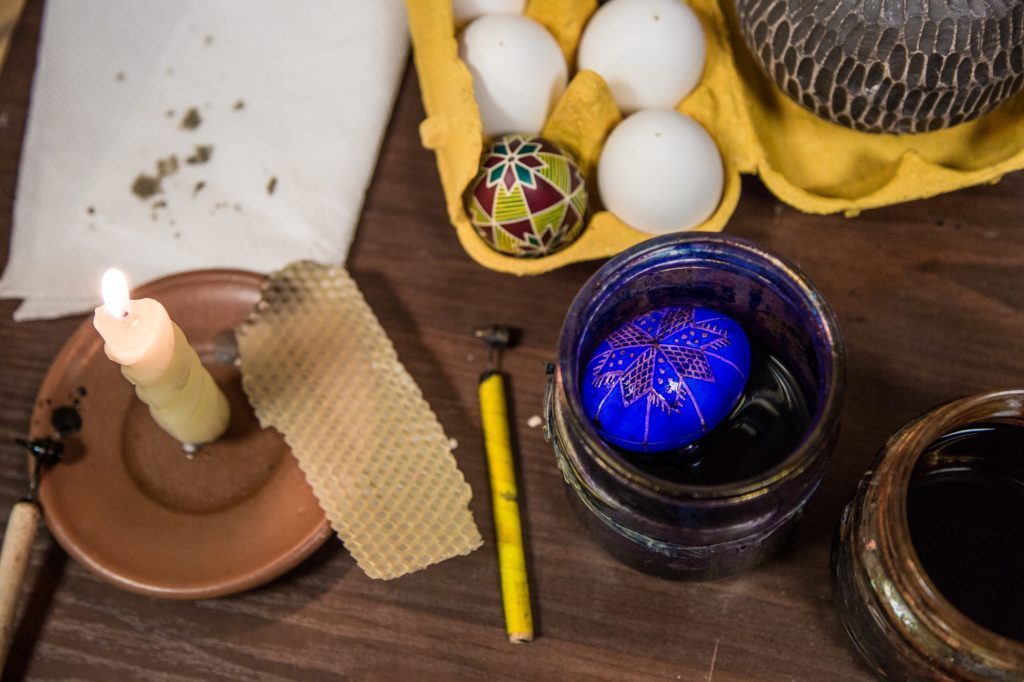 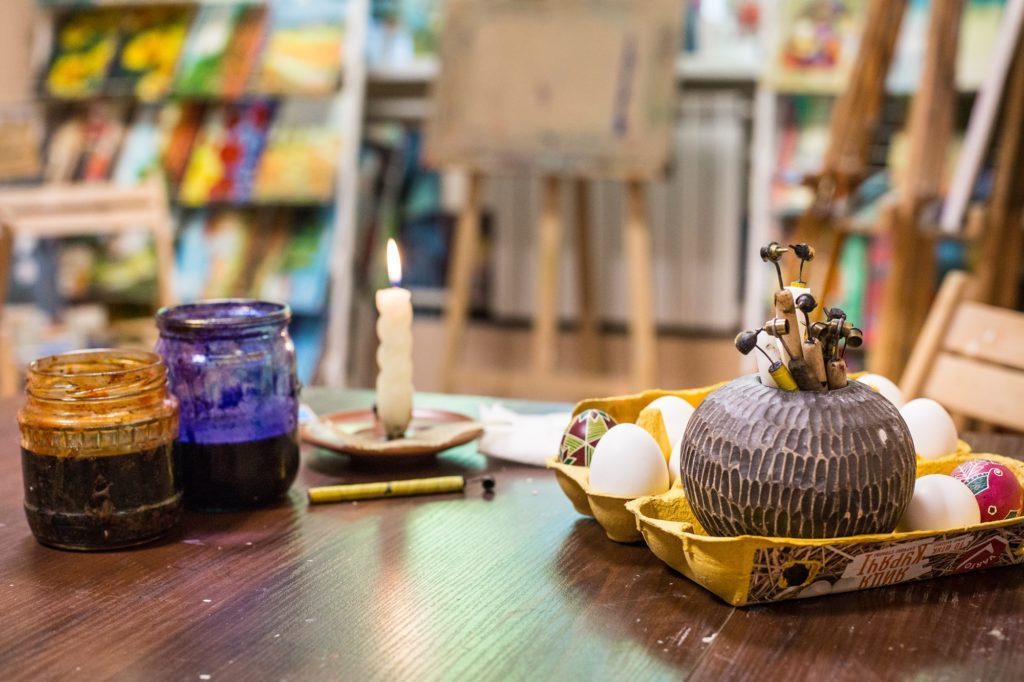 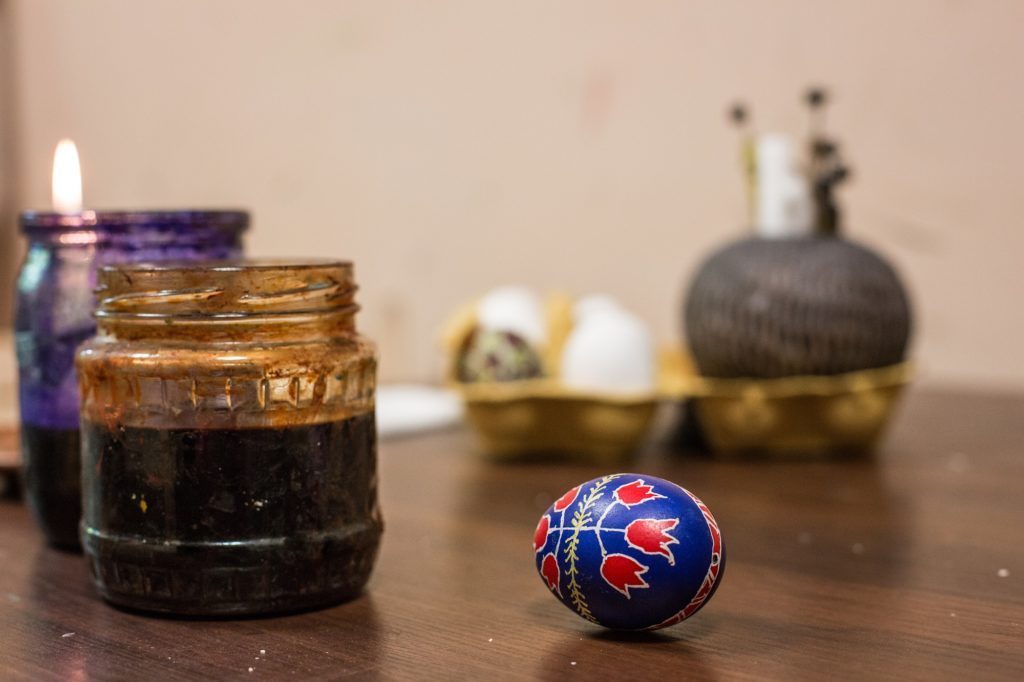 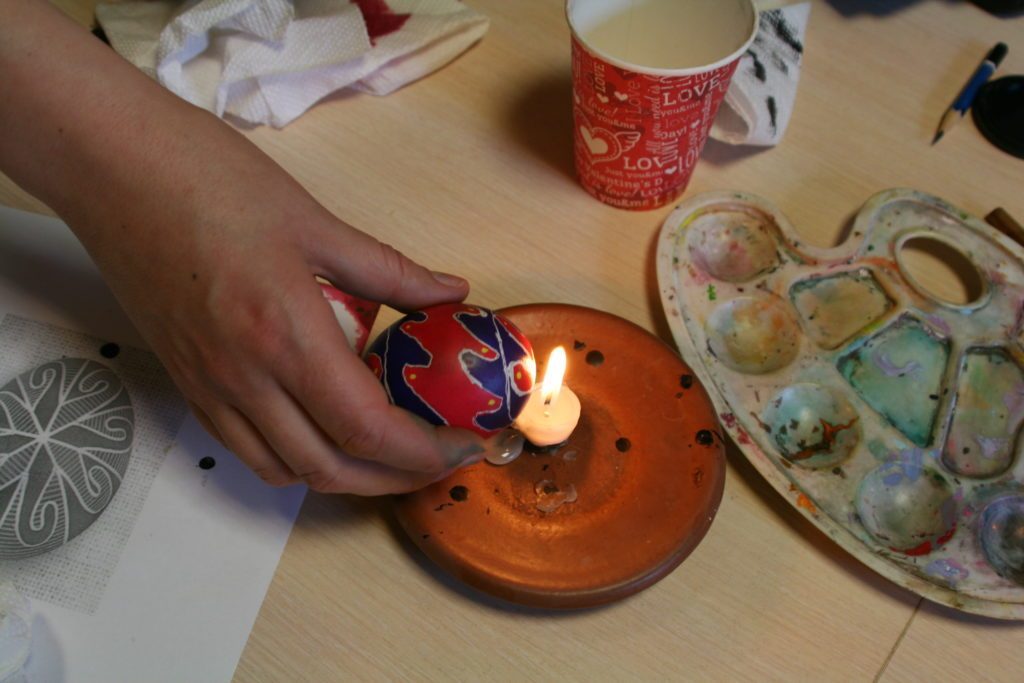 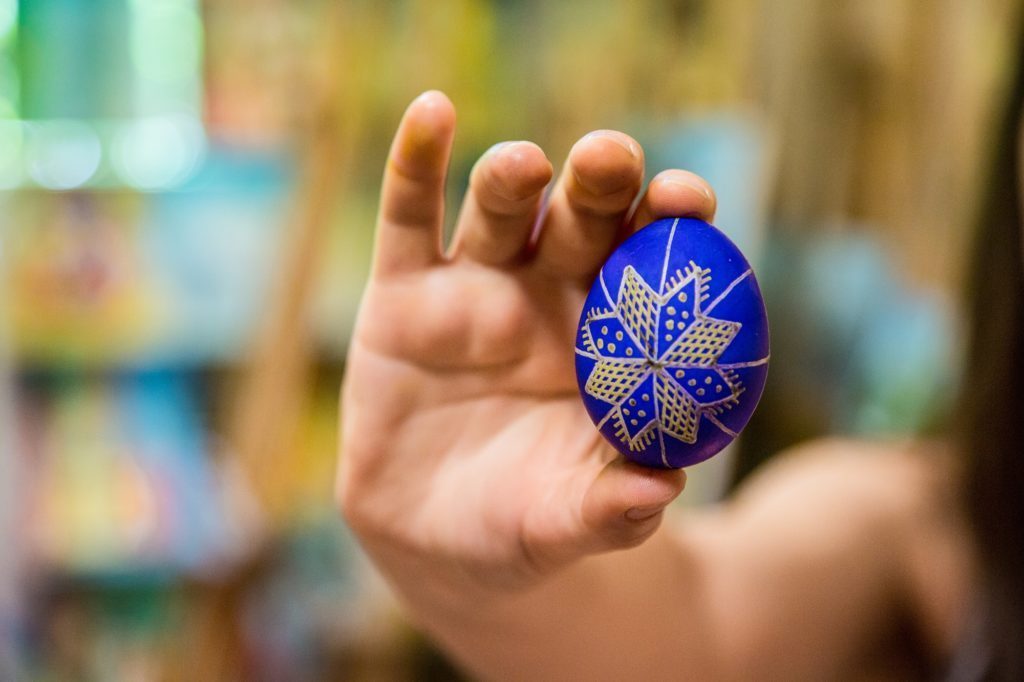 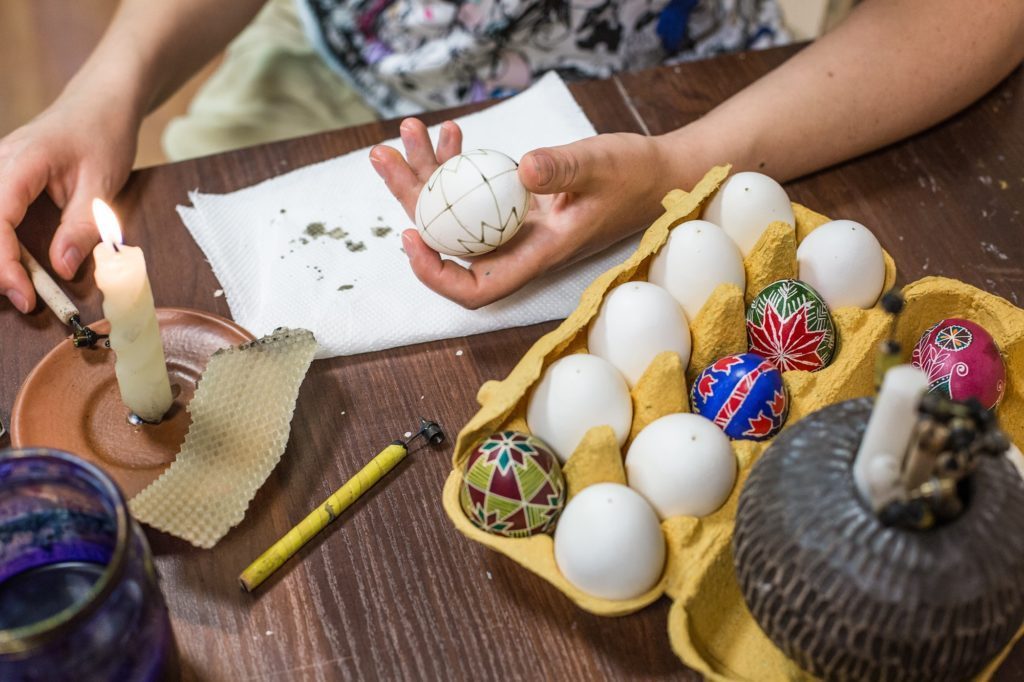 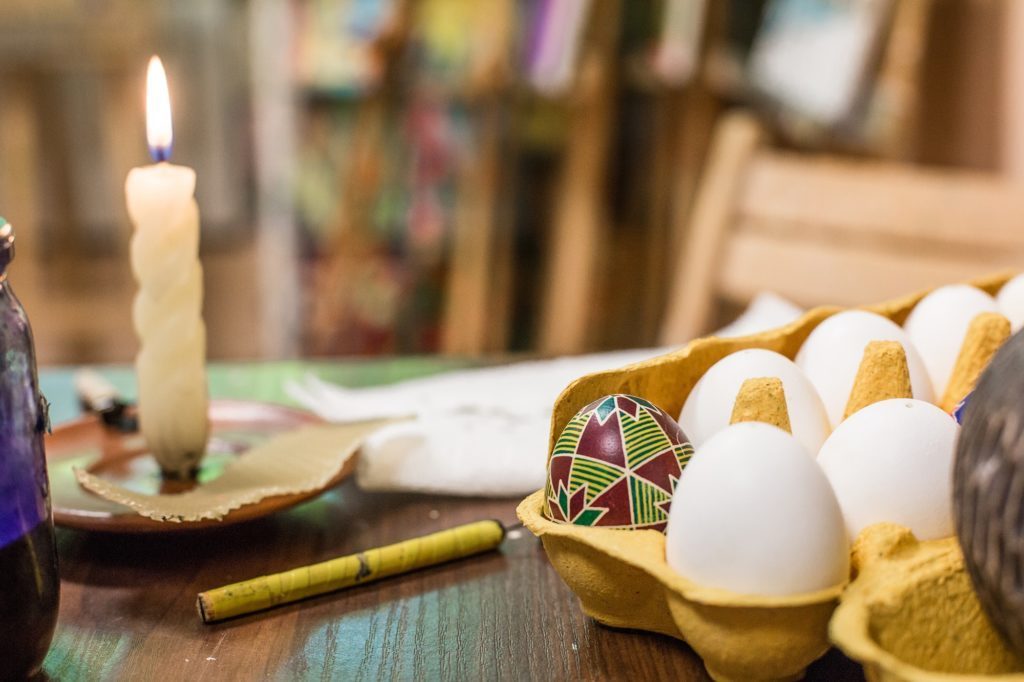 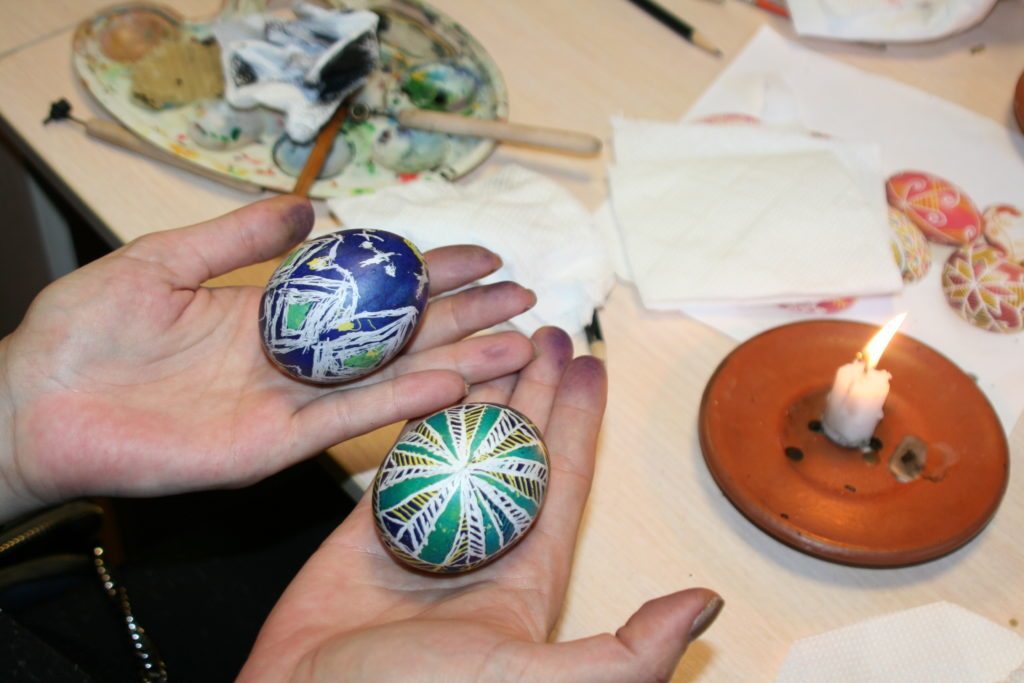 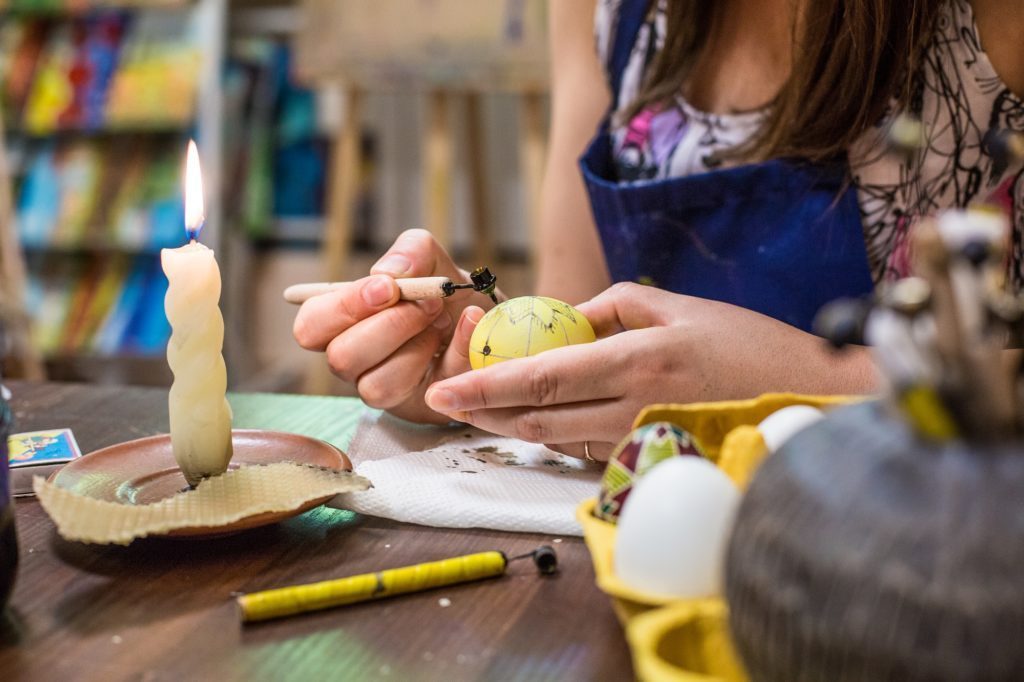 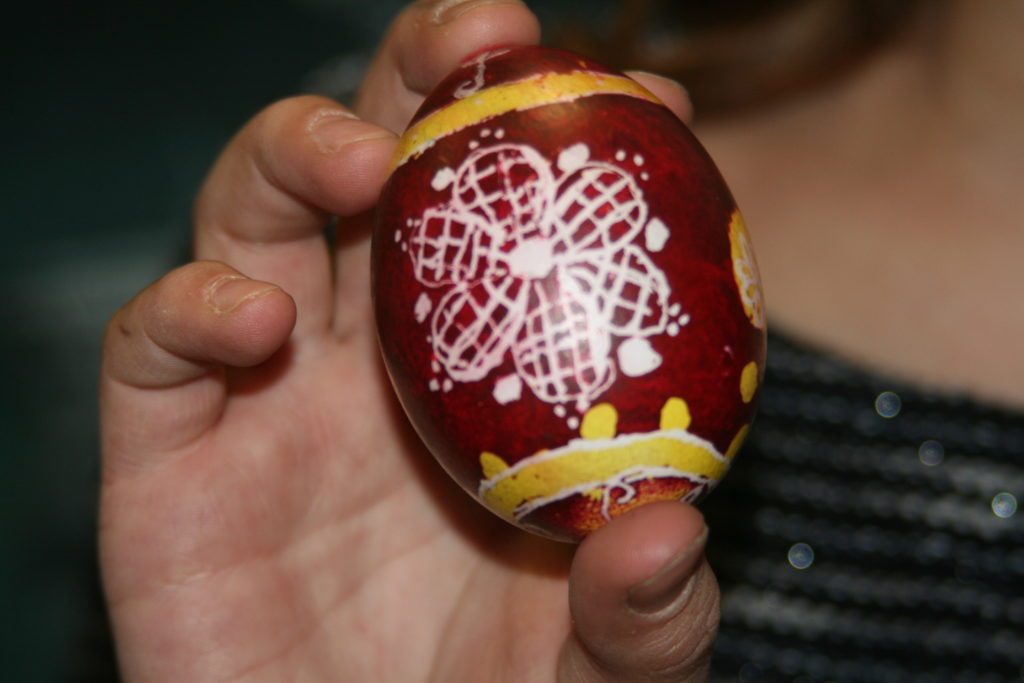 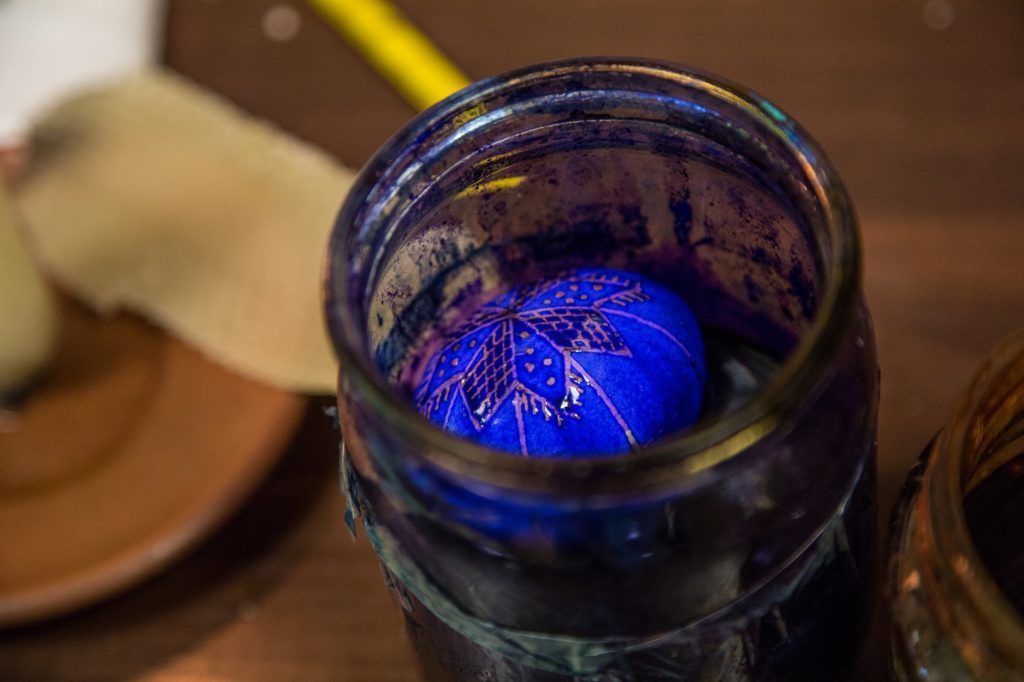 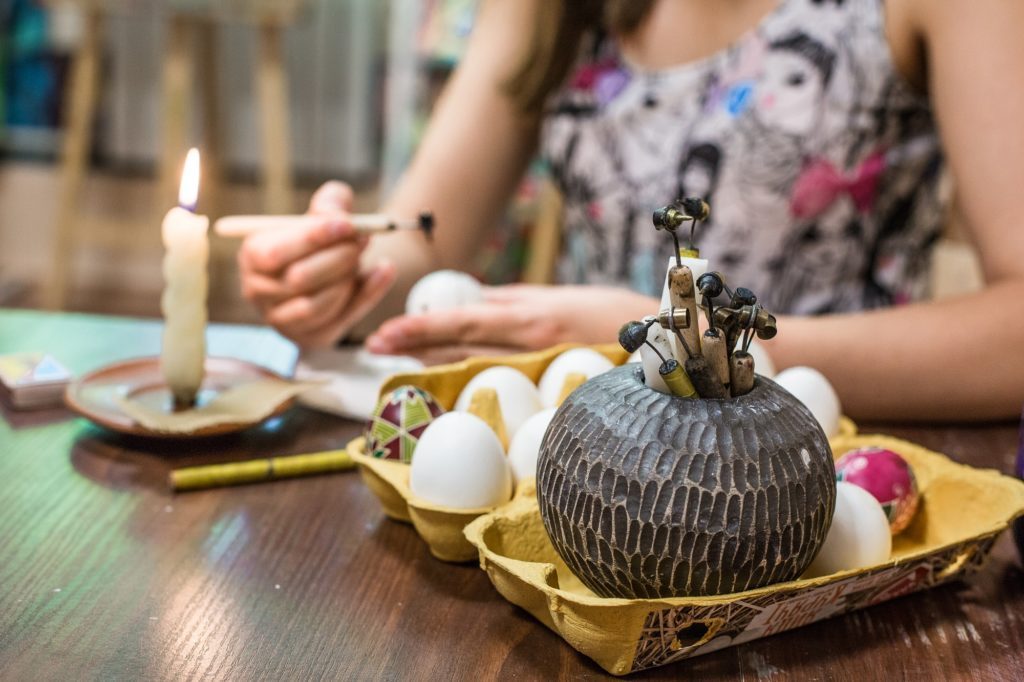 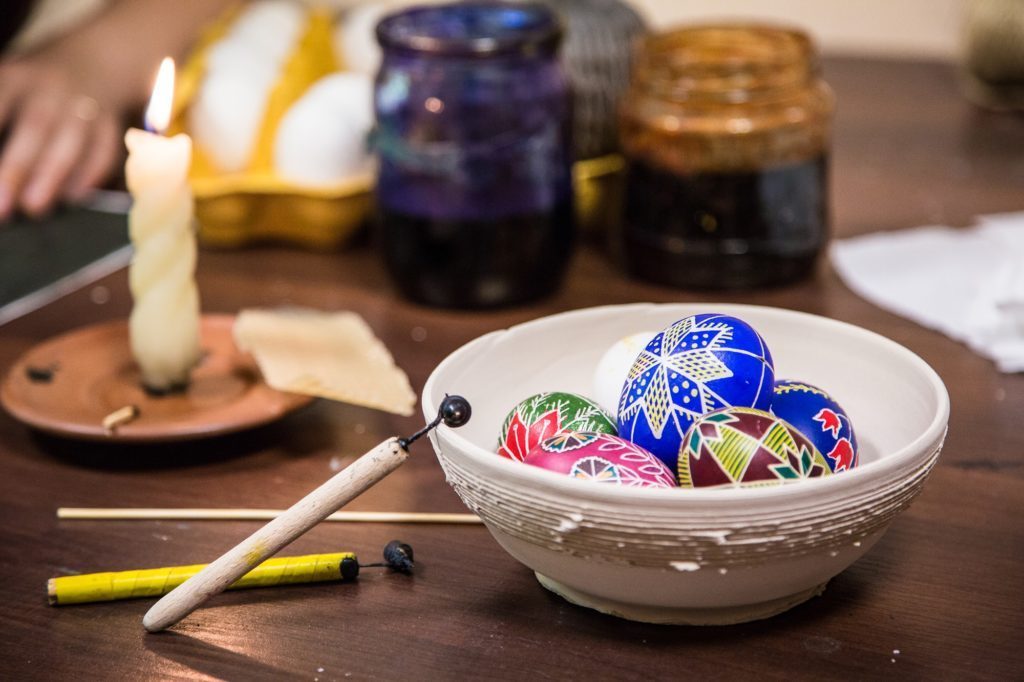 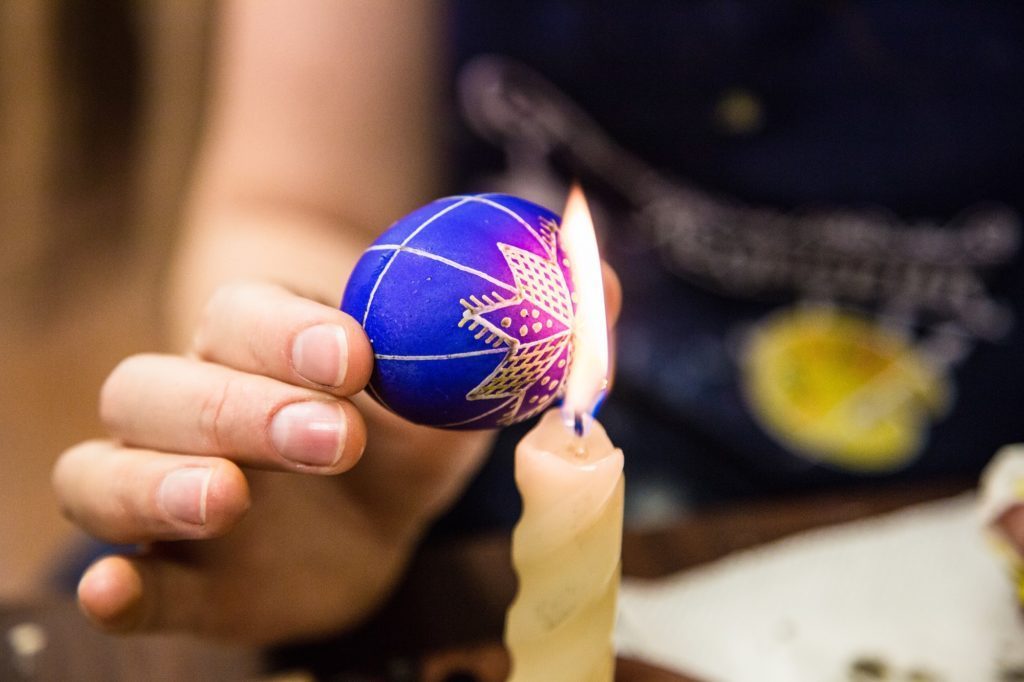 Numbers of participants - up to 8 people

The masterclass program resumes painting of a hollow egg with wax, style use sand special dyes for pysanka painting.

A place where soul rests

If you happen to be or live in Kyiv and are looking for a place to switch off your worries and switch on your creativity – this is it! Likhtaryk (Lampade-Arte) is definitely a place to come back to again and again whether you are alone, with your partner, kids or a bunch of friends – the lovely and highly professional personnel will always warmly welcome you, create a cosy atmosphere of true art and passion. English speakers too. The types of masterclasses varies widely and will satisfy the most demanding participants. They know a special way to kids’ hearts and none will leave unsatisfied! Definitely recommended!

Atmosphere of kindness,joy and art!

I really relish this artstudio because there I can do both things-relax from an intense rhythm of a working week and broaden my horizons,knowing a lot about the world culture.Furthemore I enjoy classes of painting in oils,everyone at the end of the class gets a gorgeous picture and you really don`t notice the time that you spend on doing it.So I really advice this place to everyone who would like to visit a piece of Europe in Kyiv,touch the world of art and create your own masterpiece!

This is a wonderful place where you can spend time both themselves and your family to develop your talent in a friendly atmosphere.

Do you admire the paintings on Andriyivskyy Descent? It’s time to create your own masterpiece.
In my opinion, the attitude is what differentiates the Likhtaryk among the other art studios.
Atmosphere at the studio is relaxing and friendly, so you may relax, enjoy and be yourself, regardless of the age, status and skills.
If you need advice, the teacher will come to you and help. Moreover, you may finish your work another day if you wish.
I’ve already visited the Likhtaryk studio several times. Here I have a chance to try different art techniques and styles.
JAll the necessary materials are provided by the studio. Caring staff will make all the arrangements before you start creating a piece of art, and also no need to clean your workplace afterwards 🙂
Also I was pleased with reasonable prices and central location of the studio.

Nice place to visit while you are in Kiev

I was surprised to discover such an interesting place in the center of Kiev. I was looking for something new, creative and not trivial place.
Likhtaryk Art Studio provides a cozy, warm and welcoming atmosphere, their friendly staff treated us their delicious tea with candies and told us about their activities.
In a result we decided to have an oil painting masterclass. I can say that whether you’re improving your technique or starting from scratch, this class will help you to paint with confidence.
After 3 hours we drew a nice picture that will remind me about this pleasant time.

I did the History of Arts course here last year and can recommend this studio to everyone visiting Kiev. They offer a wide variety of activities to match your cultural interests:) You will enjoy pleasant atmosphere and Ukrainian authenticity here:)

"Everything you need and more"

This place is awesome. Great service and soooooooo friendly. Polite, funny, knowledgeable and really helpful staff. Very competitive prices. If you’re looking to learn something new, I would suggest you schedule a lesson.

Great time to have a rest

I have visited Art Studio Likhtaryk more than 5 times. And every visit it was a time of joy and relax. Painting in different techniques and pottering are the way to find something new in yourself. With the help of professional trainers you enjoy both the process and result.

I had a class in pottery. And I must say had a great time with interesting people, attentive teacher and delicious tea. It’s like a house of your friends, I would recommend Likhtaryk Art Studio to all ages and interests!

I had a great time visiting this Art Studio. The time passed very quickly. I made a beautiful pot and a nice cup. It was very unusual and interesting. Good location – it is situated in the center part of Kyiv, near the Botanical gargen, high-quality servise, reasonable price and vivid impression.

How to get us 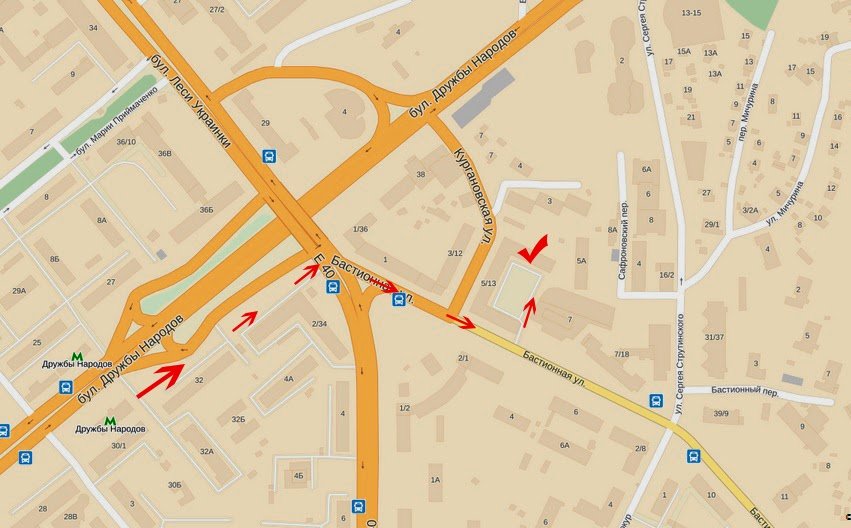